From Talking Walls Discover Your World

Thousands of messages decorate the fence outside  the home of Pablo Neruda, thanking him for his beautiful poems.At the age of ten Pablo wrote a poem so amazing that his father asked him who had really written him. Schoolmates made fun of the boy who said he was “hunting for poems.” 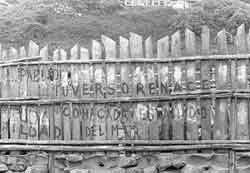 Pablo Neruda’s Fence still stands at Isla Negra, Chile, long after the poet’s 1973 death. It was built to keep his dogs from chasing sheep, and has become a message board, a shrine. On July 12, his birthday, people visit and pin paper messages to the wooden slats of the fence, carve words of love into posts, scrawl lines in charcoal that will be washed away and replaced with new messages, new prayers. A friend of his wrote: “There is not a scrap of the wood not written on. They all address him as though he were alive. With pencils or nail-points, each and all of them find a particular way of saying Thank you.”

This site uses Akismet to reduce spam. Learn how your comment data is processed.